Excerpt from forthcoming "Her Perilous Journey: A Young Woman's Voyage" 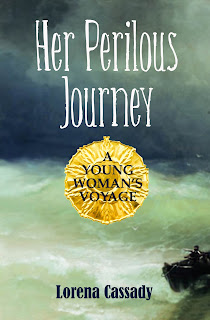 Note to Reader: I've been struggling with this book for many years, and this is the third edition! In this latest and last attempt, my intent was to leave it open for a second and third volume to follow. For those reader who find their way here, I am offering a limited number of free ebooks, in exchange for an honest review on Amazon.  You can find it here:

Below is an excerpt to give you a taste:


The next day, Mary and I met in the playground again. I wasn’t ready to invite her over to my house yet—Mother could be so unpredictable. We sat in the swings again, this time more relaxed and personable.
“I’ve heard Catholic school is hard,” I said. “Academically, I mean.”
“Harder than your school. But we get lots of holy days off. Like, this is the Month of the Holy Souls, so we’ve spent more time on retreat than in class.”
“Doesn’t sound too shabby.”
“Well, it is! Reeeally shabby! Retreat is, like, being shut up in an auditorium with an old fart priest who’s trying to, like, scare you into staying chaste.” Mary saw my clueless expression.
“Chaste?” I asked.
“It means you are still a virgin. You haven’t had sex.”
“Oh. That must be weird,” I said innocently. I had crossed the chastity frontier long ago.
“Yeah. So, he tells us stories meant to keep us on the straight and narrow. Want to hear one?”
I was always ready to hear an interesting story.
“Well. There was this guy. He asked this pretty girl out for a date and he took her to a movie. They went for a sundae at Gifford’s. Then he drove her up to Lover’s Lane.”
“Where’s that?”
“Right. You and I wouldn’t know where it is, because it doesn’t exist—except in the priest’s prurient mind.”
“Prurient?”
“It’s a Catholic word that means “anything to do with sex.”
“Oh,” I said.
“So, it’s dark. And the car is parked on this deserted street and the guy makes a play for the girl. Remember, she’s chaste. He lunges at her and she is petrified to death! It was the last thing she expected.”
“Ha!” I laughed, doubtfully.
“She fights him off, of course.”
Mary’s swing made metallic screeches as she swung back and forth, preparing the next part of her story.
“He was frustrated, so he turned on the radio. He thought it would distract her for a while and then he would try again. But a news bulletin came on. A convict had just escaped from a nearby prison!”
“How nearby?” I gasped.
“Like, a five-minute walk from where they were parked. And the convict wasn’t just a thief or pilferer or something like that, he was a convicted murderer. The radio said he would be easy to spot though, because one of his arms had been severed at the elbow and replaced by a steel hook.”
“Did they lock the car doors?”
“Well, she did. She wasn’t about to lose her chastity and get killed.”
“Right!”
“But the horny boy had one thing on his mind. Getting into her pants. She fought him off, screaming, ‘I’m scared, I’m scared! Please take me home! So he got really pissed off. He turned the key in the ignition and took off so fast the girl’s neck got jerked out of whack. He pulled up in front of her house. When he went around to open her door, guess what he found?”
“A hook hanging in the door handle!” I yelled, excited.
Mary paused, disappointed. “How did you know?”
“Because I’ve heard the story before. Like a hundred times. But you tell it better than anyone else!”
“Really?” Mary skidded her sneakers on the blacktop to stop her swing. “That son of a bitch.” She was talking about the priest.