Excerpt from Dragos and Holmes

For release on January 1st! You can preorder now for the 99-cent sale here on Amazon. 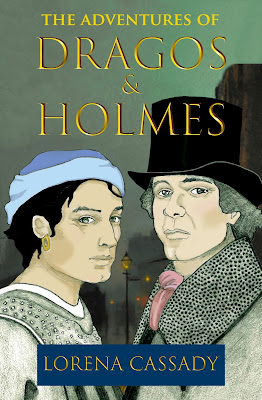 
He took my hand and pulled me into the bedroom, then disappeared momentarily. When he returned he was carrying the bowl of butter Mrs. Hudson had brought for the breakfast table. She liked to bring it up early so that it would be soft for the biscuits. He set it by the bed. As I watched, he threw off his nightclothes to expose his satiny white skin, and spread an India rubber mat over the mattress to protect it from stains. He placed lengths of rope and a leather whip beside him on the bed and stretched out naked on his belly. I hadn't seen the leather whip before. This was an escalation.
“I have been perusing the works of the Marquis de Sade,” he said, with a hunger in his voice.
I had read them, of course, but was dismayed that Holmes was making ever deeper forays into the world of sexual domination fantasy. What Holmes wanted, what Holmes thought he needed, was to be fucked by some mythical buccaneer of the south seas, his safe version of what we Londoners call the “rough trade.”  That happened to be me, Dragoș the Merciless. Very well. The least I could do was to teach him a lesson.
I tied him securely to the four posts of the bed and smeared his callipygian buttocks so thickly with butter that I could almost see my face reflected in their convex curves. I wiped my hands off on a towel and unbuttoned my trousers, pausing to observe how eagerly Holmes offered himself to me. His glistening body writhed sensually on the slippery rubber mat and his breath accelerated into an animal pant. I feared he would spend himself before I thrust myself inside.
“Holmes, darling. You forgot to tell me the script.”
He hesitated for a moment, the spell broken. “What do you mean?”
“Who do you want me to be? Not myself, certainly.”
“Well, when I saw your eyepatch, I thought you might be…”
“Blackbeard?”
“Yes. He was such an evil man.”
“Before or after he was beheaded?”
“Dragoș,” Holmes groaned, “you mustn’t break the mood.”
“Yours or mine?”
“Ours, silly. You don’t mind do you? I’ve always wanted to be ravaged by Blackbeard.”
“Then ravage you I will! But I need a scenario.”
“Very well,” he said, sounding exasperated. “You have been hiding down by the river, when you see me walk by, and…”
“Not a beach? He was a sea captain, after all.”
“Very well, a beach! Will you stop interrupting?”
“Do continue,” I said.
“You have been hiding in a secluded cove from agents of the British Navy. There is slight rustling noise a few paces to your right. You steal towards it to investigate, alarmed of course. Perhaps you have been discovered! But then you see a slender young man, like those ones you see running around those Etruscan vases.”
“And what is he doing?”
“Eating a pomegranate under a palm tree.”
“Is he naked?”
“Not yet.”
“Do I pull down his trousers?”
“Etruscan boys don’t wear trousers.”
“What do they wear?”
“For god’s sake, Dragoș, rip off his clothes, would you?”
at December 11, 2017